5 Reasons Why You Should Consider Buying Second-Hand Cars [Infographic] 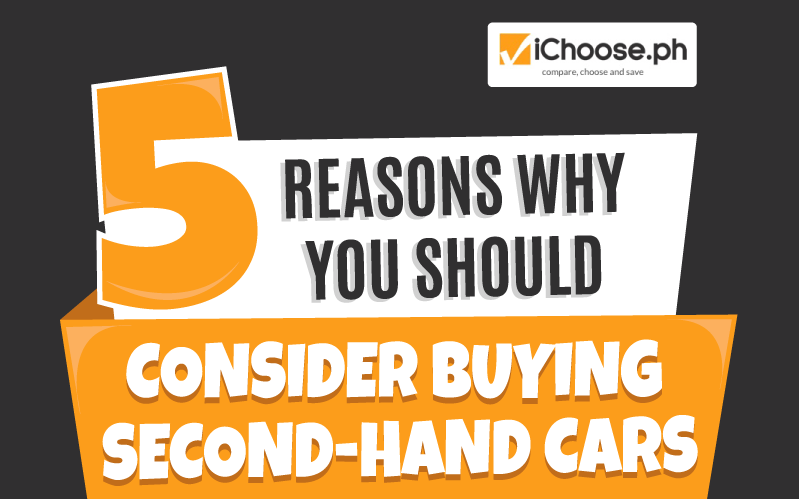 You want a new car, and you’re having a hard time because most models you see cost a lot of money since they’re brand-new. People tend to favor brand-new over second-hand vehicles, which would prove problematic money-wise.

However, there might be times when buying used cars is better than going for the new ones.

Cars have a lot of attractive features, and the price of one vehicle may or may not be one of those features. A brand-new car will cost more, which might make an individual balk, which is why buying a second-hand one seems attractive.

Second-hand cars are more affordable than brand-new ones with the price sometimes reducing by 70 percent from their original cost.

A brand-new Toyota Vios costs around P852,000 when you buy it straight from the dealer. However, a used Toyota Vios costs significantly lower, ranging from P770,000 to around P230,000. After ten years, the original price tag of a Toyota Vios would reduce by 73 percent, resulting in more savings for you.

Even a second-hand car that’s still relatively young would be cheaper by around 11 percent or so which lets you save some money while getting what may seem like a brand-new one.

No Worries on Depreciation

Depreciated cars are better to get a bang for your buck especially if you’re not concerned about it losing value overtime. Depreciation makes cars cheaper, and those that depreciated for around two or three years tend to look brand-new while costing significantly lower. It is advisable to buy cars that depreciated for four or five years since they no longer take big depreciation hits opposed to newer ones.

You Plan to Resell the Car in the Future

Since depreciated cars cost less than brand-new ones, upgrading or customizing it won’t seem troublesome. Brand-new cars take big depreciation hits, and faulty customization will further make it lose its value. Maintaining a depreciated car is better since one can practice with it without worrying about it losing value and it even lets you sell it at around the same price you bought it.

Upgrading or customizing a depreciated car can significantly increase its value allowing for reselling in the future.

Getting a used car insured costs significantly lower than a new one since car insurance companies consider a car’s age and fair market value when calculating insurance premiums. Others might think that insuring a used car is a waste of money, but it is still essential to keep yourself safe.

Getting involved in car collisions with insured used cars lets you save a significant amount of money for repairs. Heavily damaged used cars cost more to repair than buying another second-hand car

You Want to Buy a Phased-Out Model

If you’ve got a taste for classic cars, then second-hand ones are the ideal go-to for you. New cars are significantly expensive and won’t likely include the classics that you want.

A discontinued classic could cost a few hundred thousand while brand new cars of the same brand would cost in the millions.

If getting the latest model with all the technological goodies isn’t much of a big deal for you, then there’s a high chance that you’ll get either a huge discount or excellent terms on a car that will soon get discontinued or upgraded. Dealers will be willing to incentivize the purchases of a particular vehicle that will soon either be phased out or quickly replaced for newer models.

Vintage car enthusiasts are the ones who’ll benefit the most from buying used cars.

It might be difficult knowing how to buy used cars in Manila, but being knowledgeable can greatly benefit you, especially if it’s your first time buying one.