What does it Mean: No Additional Excise Tax for Automobiles this 2019 Under TRAIN Law [Infographic] 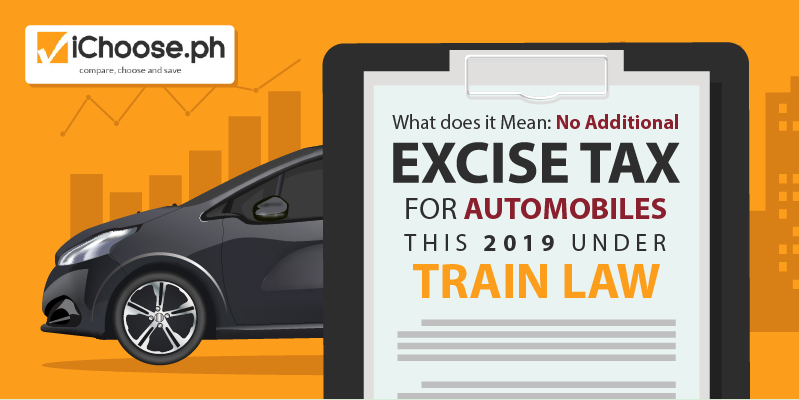 Most people who are about to buy new automobiles are afraid of the “excise tax” that they will need to pay. Luckily, in 2019, this should no longer deter anyone who is planning to buy a car in the Philippines because of the no additional tax under TRAIN Law.

When the Tax Reform for Acceleration and Inclusion (TRAIN) Law was approved in 2018, it immediately caused the fuel prices to increase so dramatically. Many dealerships across the country used the threat of increased “excise tax” as a strategy to attract buyers who are very eager to own a car before the new policy becomes effective. The then newly-implemented tax reform proved to many new car owners that the money they saved initially for car purchase will inevitably go to higher fuel costs that they must endure while driving their newly acquired investment.

In this infographic, we will discuss the history, benefits, and what does the no additional excise tax for automobiles mean for people who are basically on the verge of buying a car. First. Let’s discuss the history of TRAIN Law:

The Tax Reform for Acceleration and Inclusion (TRAIN) is the first package of the comprehensive tax reform program (CTRP) envisioned by President Duterte’s administration, which seeks to correct some deficiencies in the tax system to make it simpler, fairer, and more efficient. It also includes mitigating measures that are designed to redistribute some of the gains to the poor. Through TRAIN, every Filipino contributes to funding more infrastructure and social services to eradicate extreme poverty and reduce inequality towards prosperity for all.

TRAIN 2 also proposes to modify and limit the fiscal incentives granted to individual businesses. Currently, the tax incentives are enjoyed perpetually and are applied instead of all other taxes. Under TRAIN 2, the government wants to make the fiscal incentives transparent, targeted, performance-based, and time-bound. TRAIN 2 also seeks to repeal the special laws on investment tax incentives and provide for a single omnibus incentives law. Two central bills cover the second package of the TRAIN, both of which seek the reduction of the corporate income tax rate of 30 percent.

House Bill 7458 proposes an automatic reduction in the corporate income tax rate by 1 percent every year beginning 2019 until it reaches 20 percent by 2028.

House Bill 7214, on the other hand, proposes a conditional reduction in the corporate income tax rate, beginning January 1, 2020, by one percentage point for every 0.15 percent of GDP reduction in the cost of granting tax incentives to business investments, two years before the effectivity of the new rate. The goal of House Bill 7214 is to reduce the corporate income tax rate to 25 percent by 2022.

Benefits of No Additional Excise Tax for Automobiles Under Train Law

On January 01, 2018, the Tax Reform for Acceleration and Inclusion (TRAIN) Act Package 1 took effect and more and more automobile buyers are making use of this benefit through purchase their desired car. Let’s discuss the interests of the TRAIN Act under automobiles:

If you are interested to learn more about how you can avail car insurance for your newly purchased no additional tax excise automobile, you may check out our website at www.iChoose.ph for more information.