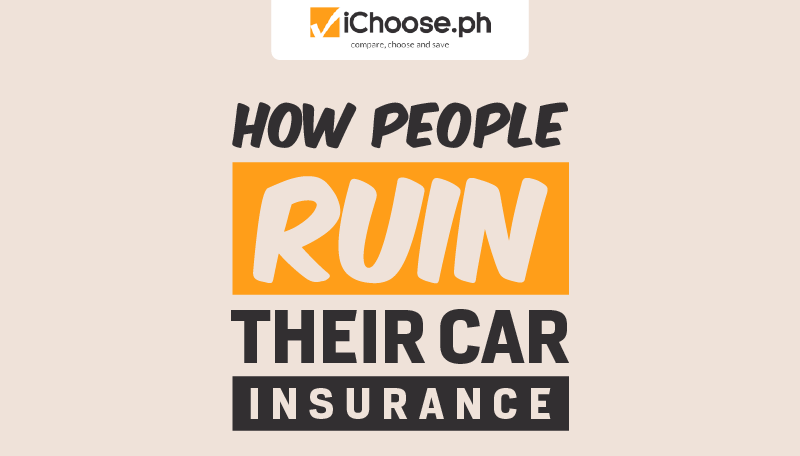 Car accidents can happen anytime, despite any precaution that a driver might have. Driving as safe as possible can lessen the chances of getting caught in an accident, but there are still other drivers on the road that can cause an accident due to their negligence or other factors. Car insurance in Manila is necessary to make sure that both the driver and the vehicle are financially protected.

However, some people get insured only to unknowingly ruin their insurance plans as they receive damage not covered by their insurance. There are several ways that people can destroy their car insurance policies.

The insurance company can suspend an insured’s car insurance coverage until they’re up-to-date on their payments. Getting caught in an accident with a suspended policy will be financially disastrous to the car owner.

Let Other People Drive Your Car

A newly licensed teen driver will have to be added to the insurance policy as soon as possible if one would let a freshly licensed teenager drive your car. People can consider themselves lucky if their insurance company will either revise the insured’s premiums to include the young driver or if the teenager will be covered in the event of an accident. However, the usual outcome will most likely be the insurance company dropping the policy altogether.

Lending your car to a friend for a few months without notifying the insurance company is also a mistake since any accident that your friend may go through won’t likely be covered by your insurance. Car owners must notify their insurers that they’re lending their cars so that they can add the driver to the insurance policy. If the insurer disagrees, then at least both the car owner and the friend can find out about it before getting caught in an accident and can get the friend to get non-owner car insurance.

If your policy has a named-driver exclusion, then the excluded driver should never be allowed to drive the car under any circumstances until the driver is added back on the plan.

Some people sell off their cars to their relatives, especially to their children, once they have enough money to buy a new one or they want their children to inherit the vehicle. When someone else finally owns the car, the original owner no longer has insurable interest on the vehicle and their insurance will no longer cover their car. The only ones who have an insurable interest in a vehicle are the car owner, the lienholders, and the co-signers, and the new owner must get new insurance for the vehicle.

If the new owner is a minor, then they’ll likely need their parents or guardians for the new auto insurance. If any insurance claims are made under the old policy even though the car has a new owner, then the insurer will likely see it as insurance fraud, deny the claim, and cancel the policy.

Not Getting Uninsured and Underinsured Motorists Coverage

Some people don’t consider getting uninsured and underinsured motorist coverage since they think that they won’t need the additional protection from such coverage as their insurance can cover them. Not all motorists in the Philippines are insured or adequately insured, and drivers must be able to protect themselves from such motorists further.

The additional coverage will be able to financially protect a driver from an uninsured or underinsured motorist in case the auto leads to the driver receiving bodily injuries. Without the coverage, the driver might have to pay out of the pocket to cover the medical expenses.

Just because the driver is insured doesn’t mean that they’re free to act recklessly and make an insurance claim here and there. Insurance companies consider every single request that a driver makes, and too many requests will result in higher rates and, potentially, not allowing the driver to renew the policy.

Foolish drivers will undoubtedly try filing a fraudulent car insurance claim by faking an accident or exaggerating the details of one. If the insurance company finds out that the insured filed a fraudulent claim, then it will be rejected.

Insurance fraud is also punishable by law under Section 232 of the Republic Act 10607 or the Revised Insurance Code. Fraudsters will be fined twice the amount of the claim and up to two years of imprisonment.

Car insurance policies are specific on their coverages and will typically exclude coverage for a personal vehicle if it is used for other purposes. A commercial or business-use insurance policy covers the risks not present with vehicles used for private purposes. If ever you will start using your car for business purposes, then you will have to inform your insurer about it.

It’s essential to get your car insured for the specific purpose that you’re using it. If you insured your private vehicle, then you should not use it for commercial ridesharing activities or others, then your insurance claims will likely be rejected. There’s also the chance that your insurance policy will be canceled.

Getting your brand-new car insured is essential so that you’ll be financially protected if ever you’re involved in a car accident, as long as you don’t do any of the foolish things stated above.